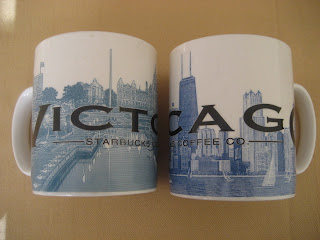 At first, I was going to choose the Chicago one but when I saw the pricing discount for the pair, I just had to get them both. I felt pretty cheap afterwards that I can be so easily swayed by a dollar. Ha! 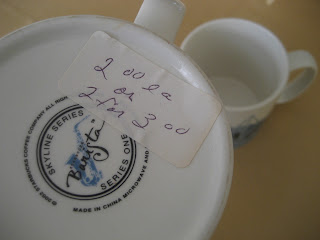 I'm glad I did since the Victoria mug sells for $25-$30 on eBay.  I was surprised that the Chicago mug is not a high seller, but it is probably because it is more common. I guess lots of flights stop over in Chicago, so more collectors have access to that city. 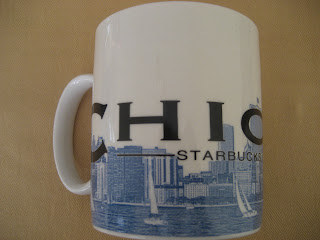 I have always loved these oversized Starbucks mugs since my sister bought me the Santa Monica one from the original City series. I rarely see them at the thrift, so I was pleased to snag these, given their mint condition! 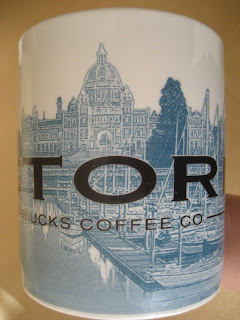 Love the Legislature buildings shown on the design!
Posted by SixBalloons at 4:22 AM 8 comments:

At the great garage sale from the future that I mentioned previously, where I picked up the Country Festival Cannisters, I scored this Figgjo Flint plate for a dollar. 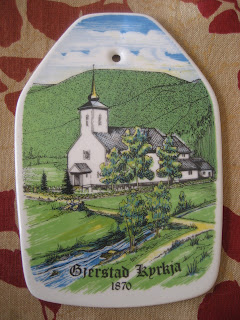 I've seen these called cheese plates before, I guess that is a good idea, because I haven't quite figured out what to do with it myself! 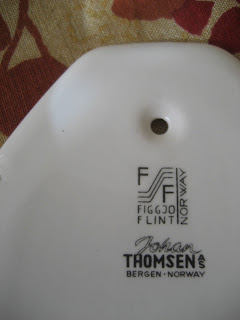 I have admired these plates from afar before, with their scenic images of Norway. These must have been wonderful collections of wall hangings. I hope I find more of these through my thrift travels - it would look great as a set, don't you think? 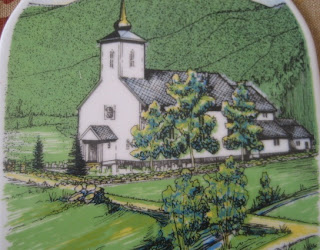 Posted by SixBalloons at 4:25 AM 2 comments:

Mr. SixBalloons and I hit up a great garage sale in downtown Vancouver this summer. It was held just outside a large apartment building on a busy urban street corner. The seller tweeted photos and updates before and during the sale, so it felt like a garage sale from the future. Haha. 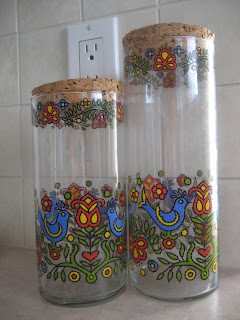 Among her many awesome items, I had my eye on these Country Festival Bluebird glass cannisters. Have you ever seen anything like it? This pattern is normally seen on Corningware pieces, which I've begrudgingly passed on before. 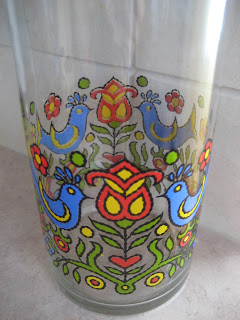 This pattern is so cute and whimsical. I definitely don't want to add more to my already good-sized Corningware collection in the blue cornflower pattern, so I'm glad I was able to get these practical pieces instead. 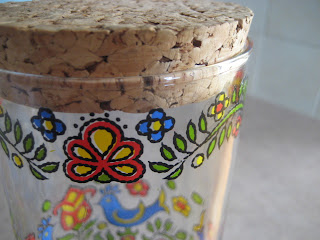 The cork stoppers are also in good shape, which is nice. I am thinking of keeping rice in the tall one, and perhaps steel cut oats in the shorty. I paid $3 for the pair - the pricing at this sale was great! 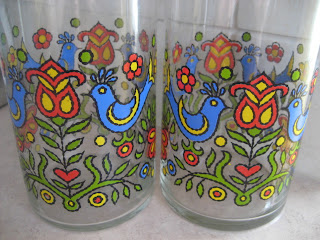 I wonder if these were produced by Corning. There are no markings, but the print and the pieces themselves are beautiful and in great shape!
Posted by SixBalloons at 5:41 AM 7 comments:

Thrifting in a Small Town - Port Hardy, BC

So we are moved... Sort of! We are currently in Port Hardy, British Columbia, a small town of 4,000 on the northeastern tip of Vancouver Island. We are staying here temporarily till our rental house is available at our longer term destination. 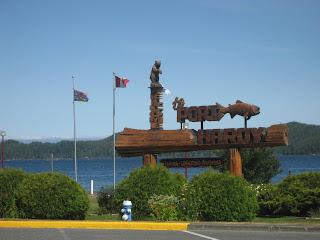 Before leaving Vancouver, I did some googling on what it would be like to thrift in a small town. Most blog posts I read were really enthusiastic, saying that small town Savers, Goodwills, or Value Villages were treasure troves. I'm here finding out for myself by thrifting as much as I can. =) 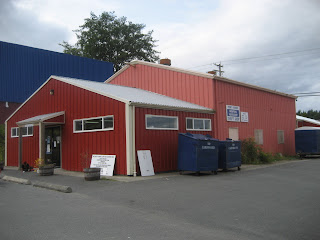 Surprisingly, considering the small population, there are two thrift stores in town. Both are located in the small downtown core. I was kind of excited to find that they were both volunteer-run, independent types, as the pricing is usually better than the big box guys. 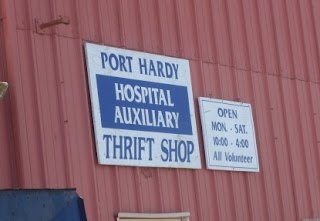 My first stop was to the Port Hardy Hospital Auxillary thrift store. There were racks and racks of clothes, some books, and a few housewares. Some items I left behind included a crystal decanter with a chipped stopper for a dollar, and a Pyrex Woodland pattern mug for a quarter. 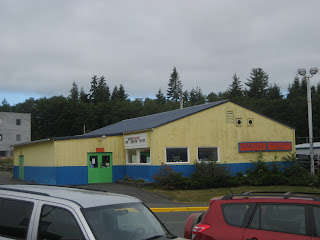 Next up was the Harvest Food Bank secondhand store. I noticed that both actually used the term secondhand store as well as thrift store - I don't see this term used much in Vancouver. What are they called in your town? There was a lot more to see here, but it was very crowded and hard to navigate with SixBalloons Baby in tow. 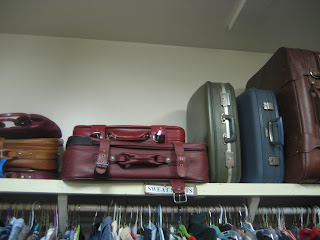 I spotted more Pyrex here, in a little Snowflake Garland salt shaker. Other tempting goodies included a Rompteropf clay baker for $5, a Hollie Hobby framed print and a $7 vintage school desk, the kind with the chair attached. Interesting note about both stores - lots of vintage suitcases! Port Hardy is a travel hub of sorts, since there is ferry service to other parts of coastal BC, and an airport. 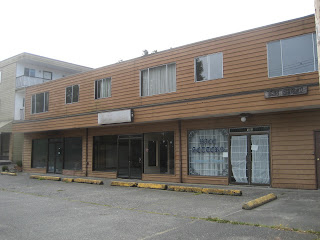 Port Hardy seems to have its fair share of vacant storefronts, but the thrift stores are thriving. I couldn't believe how much turnover I saw within a week, and the number of customers and quantity of donations going through the store.


Overhearing some conversations, I noted that an old CRT TV that had just been put on the floor sold fairly quickly, and that there is a long waiting list for beds.  These are items that some Vancouver thrifts don't even accept because they just don't move out the door quickly enough. I guess if you don't have an electronics store in town, and there's just one furniture store, it's natural that customers will search for what they need at the thrift stores. It's definitely eye-opening for someone from the big city to get used to. 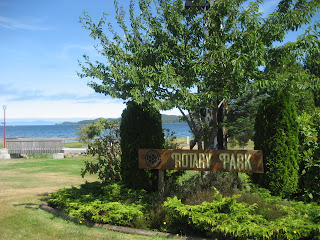 I was able to pick up a couple things that I'm pretty excited about, but I'll save that for another post. I still have more to share from earlier in the summer, so I hope to be a posting fiend in the next little bit.

I hope you enjoyed this piece on Port Hardy, I'd love to hear your comments on your experiences in a small town too!
Posted by SixBalloons at 8:29 AM 3 comments:

Earlier in the summer, I stopped at a church thrift sale in an uppity neighborhood in town. I have had success in this area in the past, and scored some vintage Fisher Price collectibles this year. 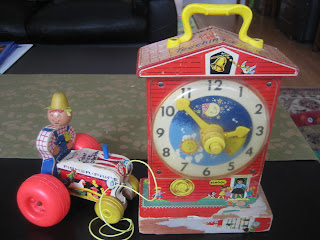 I loved my Fisher Price toys as a kid. From the xylophone, rolling telephone, to toy vaccuum cleaner, I was drawn to their colors and sounds! Of course these two are from before my time. They are dated from the 1960s! 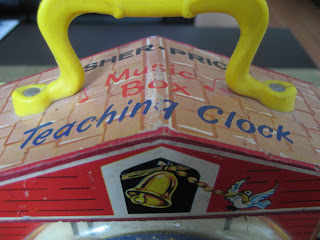 I am amazed at how these toys were actually handmade. They consist of solid wood pieces to which nails are hammered in, clearly by hand. Such a contrast from today's monotonous machinery. 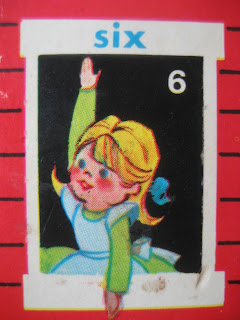 You know that SixBalloons would love this part of the lithograph on the Teaching Clock right? 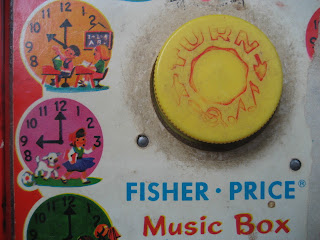 This music knob probably looks familiar to many of us. There is a line on the clock litho that reads "Musical movement made in Japan". The sound is rich and wonderful. 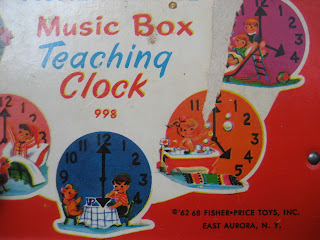 Unfortunately these guys aren't in the best of shape! 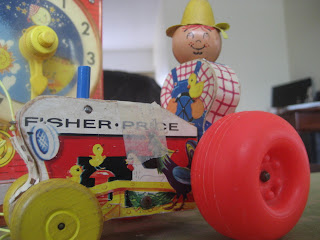 I paid $5 each for these two. I probably could have left the farmer pull toy behind but I liked the way his head bobbed back and forth as he was driving along, heh.
Posted by SixBalloons at 3:44 AM 4 comments:

I love when the weather heats up mid summer in Vancouver and the yard sales finally kick into gear! 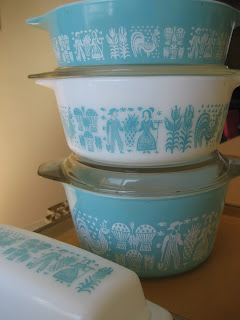 I met a very interesting picker fellow who was selling off a bunch of his collectibles at his garage sale. Luckily for me, he collects Fire-King and had a bunch of Pyrex Butterprint pieces to sell! I had a great time wading through his boxes of goodies, but I definitely had my sights on these aqua beauties. 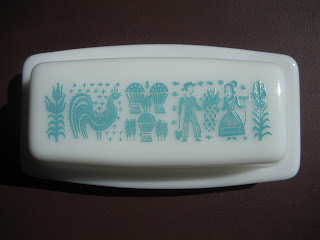 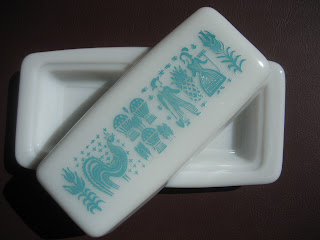 I purchased four pieces in total, including the Bake Store Serve set, missing all but one lid. I tried talking him down to fifteen but feel good about the $20 I paid. 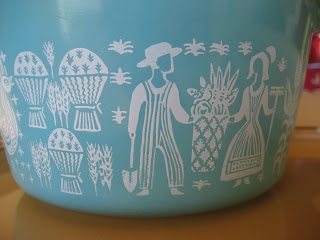 Didja notice that sweet tray these are sitting on? I won it via a giveaway from Beccalina at A Vintage South! Thanks Becca! 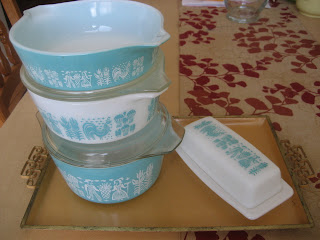 Lovely detail eh? I just can't say no to butterprint...! 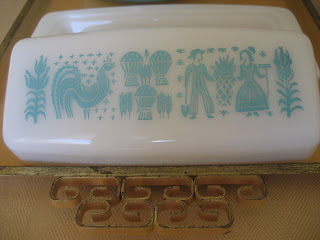