I noticed two really nice cast iron pans at Value Village some time back. As you regular readers know, I'm usually on the lookout for the enamelled stuff, so I generally don't know much about bare cast iron pieces. I had, however, heard of Griswold and Wagner's history and knew that the companies were quite old and well known. 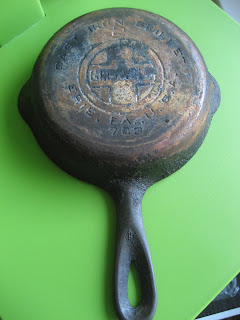 The smaller skillet was $6 and seemed to be a great size for frying up one or two eggs in the morning. The back of the pan reads:


Cast Iron Skillet
2
Griswold
Erie, PA., U.S.A.
703
When I returned home and started doing some research on the pieces, I was surprised to find that I had purchased a rare, hard to find, and collectable Griswold skillet. The font and markings on the logo identify this piece as one created in either the 1920s or 1930s. My pan would be referred to by a collector as a "Griswold No. 2 Skillet, Pan Number 703, Smooth Bottom, Block Logo, EPU." The last item refers to the factory located in Erie, Pennsylvania, USA. 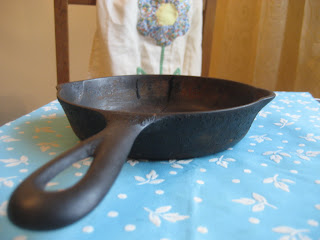 On ebay, I found several examples of this exact pan which sold for between $200-$400. The smooth bottom refers to the lack of a heat ring, a raised circle found on Griswold pans manufactured before the 1920's.  The same size pan of the older vintage with a heat ring fetches around $1,000 more. 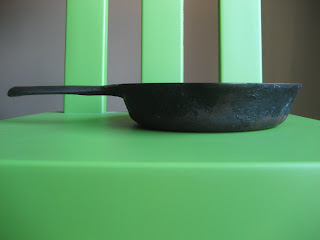 I have learned that it is important for these antique pans to be flat and unwarped by the burdens of cooking over high heat. One of the tests used to confirm flatness involves sliding a $1 US bill around the perimeter of the pan's underside. I'm happy to report that this pan has good bones and is nice and flat on the bottom. 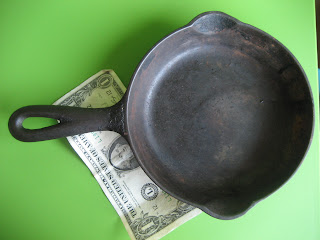 I can't believe that my $6 skillet is worth about 50 times what I paid for it! I am a bit confused as to why the #2 Griswold Skillet 703 is so important to collectors. I am speculating that perhaps fewer of the small pans were produced - maybe they were seen as being less practical than the larger pieces?

UPDATE: See the other skillet I purchased at Griswold Cast Iron Skillets Part II and read more about finding vintage pans yourself. I'll also let you know what my plan is with these antique pieces!