Regular readers here will know that I love my Vancouver Canucks. Tonight was the first game in the Stanley Cup finals and we came out victorious! The whole city is totally pumped.

A few months ago, I made my regular rounds at the Value Village, passing by the sports jerseys section. I saw a flash of my beloved vintage team colours on a jersey sleeve, pulled it out and found a nice CCM Canucks jersey with the old skate logo. 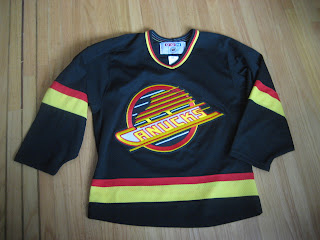 Priced at $11.99, I was alright with it until I spotted a hole near the crest on the front of the jersey. I decided that my local seamstress would be able to whip up a quick fix for a few bucks, so I brought it up to the till and mentioned it to the clerk. She comes back from speaking with the manager and says, "Would you believe that the new price is $7.99?" Woohoo! 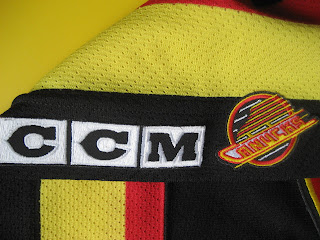 I love the bottom trim on the back of the jersey with the stitched logo. I wonder why CCM lost the deal to be the official supplier of NHL jerseys... The honour now lies with Reebok and their Rbk hockey line.

Value Village pricing is an interesting (clever) place; when I visited the store just before the playoffs started,  I saw the same jersey in a different size selling for $49.99.  Talk about inflation! 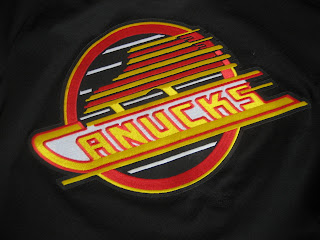