So I have seen lots of blog posts and articles about homemade natural household cleaning sprays made of vinegar. First of all, I hate cleaning the house but I most certainly hate the chemical-y smell that lingers when I have to use spray Windex or Lysol. 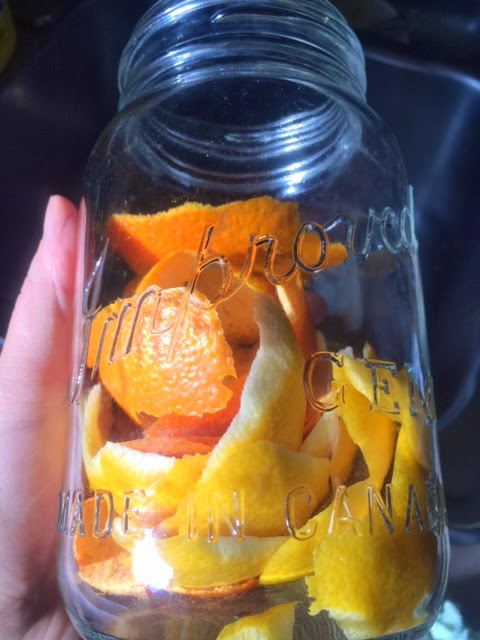 I read somewhere that one of the common ways we ingest pollutants and harmful chemicals is from overspray onto food prep surfaces, onto food itself, or into the air that we breathe. 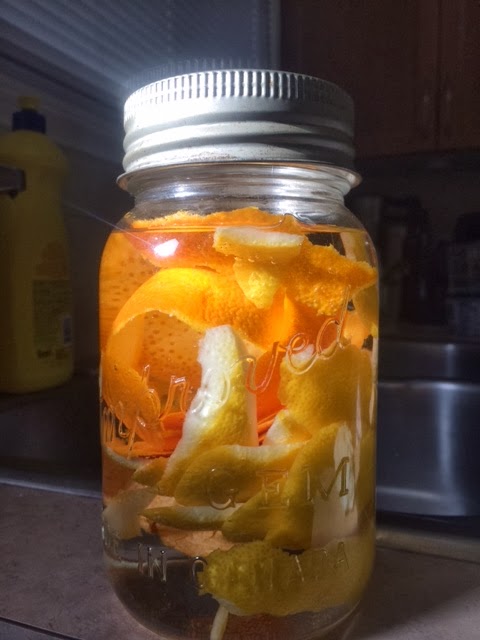 I've decided to see if the citrus infused vinegar mixture works as a safer alternate to commercial cleaning products. The concept is that the strong vinegar smell is a bit tough to take, so adding citrus peels helps tame that stench a little bit. The citrus oils then add their own nice smell, and provides some cleaning horsepower as well. 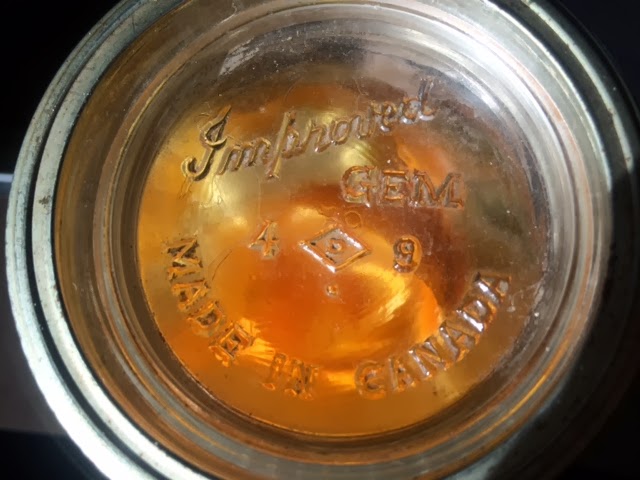 I scored some of these great Improved GEM Jars, made in Canada, at my local thrift. They have an aluminum collar with a glass lid! Embossed! For 25¢ each! I think this is the perfect vessel for a little citrus vinegar project.﻿ 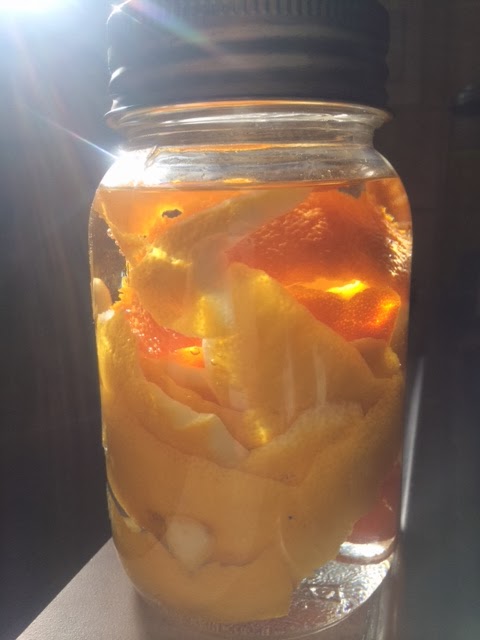 I just peeled two lemons, a mandarin orange, and a large navel orange, then poured vinegar over them. The whole mixture is steeping in the fridge, where it will stay for a couple of weeks before I strain it. Then you simply pour into a spray bottle for window cleaning, and wiping down greasy or dirty surfaces. I hope it smells nice and cleans well - has anyone out there tried this before?
Posted by SixBalloons at 4:00 AM 4 comments:

This past weekend we had a birthday party for my son, who just turned 2! If you are still reading, loyal blog followers, yep, it's been a whole two years since my free time for thrifting took a serious hit. I wanted a nice Sesame Street themed party for the event, but of course, done on a thrifty budget. 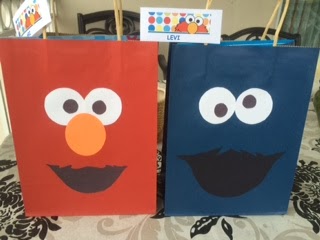 I was able to score some amazing deals at Dollar Tree, and found some great DIY ideas out there as well. One of my favourite things was creating these little loot bags with the faces of Cookie Monster and Elmo, his fave characters from Sesame Street. A little construction paper and cardstock, and 50 cent bags from the dollar store, voila! 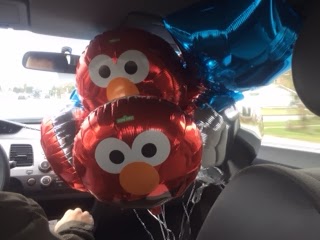 Speaking of the dollar store, pardon this quick snapshot from inside our car on the way home, but I scored these awesome Elmo-face helium balloons at Dollar Tree - I had to call around to many of the stores locally as they sell out fast! I added some blue foil star balloons to get the Cookie Monster colours in there, but at $1.40 each after taxes, this was great bang-for-buck. They're still full and floating around the house, and we had extras for some of the little kids to take home. 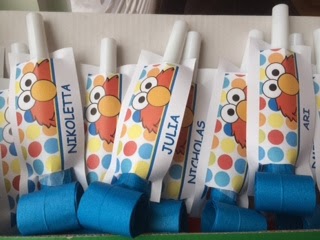 I saw some Sesame Street blowers online that I thought were pretty cool but didn't have time to get them ordered (nor did I want to pay for shipping and all). I found some Pirate themed ones in a package with terrible graphics and cheap cardboard on them. I slipped those off and just added these simple printed tags instead.

It gave the kids something to look for with their name on it, and satisfied the germaphobe in me! 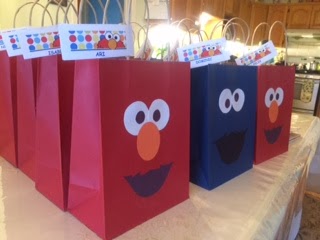 I love the way the bags look all lined up in rows. For the party, we put them up high so they could be seen but not grabbed by the excited kids.

Now I didn't get a chance to take a pic of the goodies inside the bag... Drat I forgot all about this! But the Dollar Tree has a lot of pretty fantastic colouring books, activity books, and flash cards that are all Sesame Street themed! I added some Goldfish crackers, notebooks, and that sort of thing to round out the bags.

I had a great time putting these all together, but I'm really itching to go hunting for cookwares at the thrift now that this task is completed!
Posted by SixBalloons at 4:30 AM 2 comments: